Congratulations to former BSP President, Professor Iain Chapple, who has been awarded the 2018 Distinguished Scientist Award for Research in Periodontal Disease by the International Association for Dental Research. The prestigious award was presented at the IADR conference in London on 25th July, in recognition of Professor Chapple’s significant contribution to the field of oral health research. 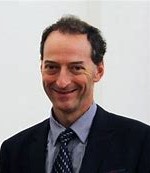 Iain Chapple, Head of the School of Dentistry at Birmingham University, is a leading researcher in periodontology whose work has covered various aspects of the pathobiology of periodontal diseases, from “bench to bedside”, and their associations with systemic diseases.

Commenting on the award, Professor Chapple said: “I was somewhat shocked, but delighted to receive the news. It is really a team award for the periodontal research group in Birmingham, because research these days is a team effort and I have been very fortunate to work with fantastic people both past and present. I must also recognise my former mentors, John Matthews and Sig Socransky, and my dear friend and colleague Ricardo Teles, who we all miss, and who I am sure would have been a recipient of this award.”