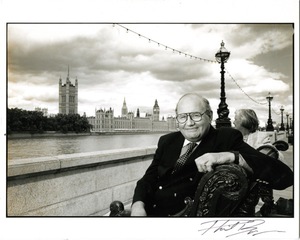 It is with huge sadness that I write this short tribute to COLIN HALL DEXTER having learned of his death on 6th July.

Sometimes in life you get lucky – and my luck was in meeting Colin Hall Dexter.  I’d been to his lectures and marvelled at how someone could be so amusing and yet get across his very serious message about Prevention.  At times I cried with laughter at his words yet to this very day I can remember all that he said  (in particular the ‘Fruit Index of Periodontal Disease’ and ‘Architectural Classification of Dental Overhangs’) whilst lectures from other so-called eminent speakers have disappeared into the mists of time.  And then I started work as the hygienist in his practice in Harley Street – it quite literally changed my life. His support and admiration for the work of dental hygienists knew no bounds.  And he was a man so far ahead of his time with his skill in getting the preventive message over to patients.  These days we hear people heralding ‘a new approach’.   Co-diagnosis? – We did it 30 years ago in Colin’s practice.  Helping patients’ to understand their own role in controlling dental disease? - We did it 30 years ago.  Hygienists having an assistant to enable them to work more efficiently and effectively? - We did it 30 years ago.  I could go on and on.  Since Colin retired I have heard nothing new about the Preventive message – I’d already learnt it all from Colin.

Life around Colin was tremendous fun.  He could light up a room with his energy and dynamism.  This enthusiasm for life allowed him to encompass so many roles.  To briefly attempt to touch on them all:  he was instrumental in setting up the British Dental Health Foundation and in later years became the Chairman twice.  He ran the Gibbs Oral Hygiene Service, and later on the UK division of Mentadent, developing many dental health products which are still in use to this day.  He was involved in establishing one of the early Corporates, Dencare.  He ran memorable courses for dentists in Majorca and in his very successful practice in Harley Street.  His Christmas parties were legendary.  He loved food, he loved wine and he loved France.  But more than anything, even more than dentistry, he loved music and he eventually retired from dentistry so that he could spend more time composing.  His efforts were brought to life on 2 CDs which he released privately to family and friends.

I feel enormously privileged to have known Colin.  He was a funny, kind and most generous man.  The last of the truly great characters in dentistry has gone.  We will all miss him.

The passing of COLIN HALL DEXTER sees the demise of a legend in Preventive Dentistry and a true friend and lifelong supporter of the British Dental Health Foundation from when he helped to set it up in 1971.

It is a great shame that Colin did not live to see some of his ideas on a preventative approach to Dentistry being implemented in the Health Service with the new dental contract.  Colin was a pioneer of the Preventive approach but had to leave the health service to implement it.   He would be delighted that this approach is now being mainstreamed into patient care.

Like several generations of dentists I was privileged to hear his inspirational lectures on Prevention, first at the Insight Group run by Kevin Lewis in Peterborough in the 1970s.  His enthusiasm, humour and caring approach were a catalyst for many to improve their practices and their service to patients.

Colin was influential in establishing the British Dental Health Foundation with the mission of getting the message to the public that tooth loss was not inevitable and that teeth could be for life.  This is an era when 38% of the adult population had full dentures and the expectation was for total tooth loss by middle age.

He served not one but two terms as Chairman of the Foundation and I was privileged to work with him during that period.   As a relatively newly qualified dentist his passion and enthusiasm inspired me as to the value of the Foundation in spreading the method of oral health which has remained my lifelong interest.  I remember many meeting of the Executive and Finance Committee of the Foundation held in Colin’s Harley Street waiting room where we worked out how to find the next tranche of money for the then infant and struggling charity.

Colin was larger than life character and will be missed by many but his legacy will live on as the Foundation takes his principles and tries to implement them across the world.